Strike it lucky with your favorite childhood tale at the Jungle Book Slot!

Jungle Book is one of the most popular tales we’ve all heard or seen on TV when we were kids. When this tale got its first cartoon we all had a chance to see Mowgli fight off Sheer Khan with the help of Baloo and his friends. Now we can relive the entire tale once again on the reels of Jungle Books. This is the latest video slot game coming from Yggdrasil Gaming which follows all the guidelines for designing video slots.

The game is designed with the latest technology featuring outstanding animations and visual effects. The choice of colors is spot on and the 3D animations on both sides of the reels make the game play fun and interesting. The game theme is accompanied by a corresponding jungle music.

Jungle Books doesn’t have a classic bonus feature like in most video slot games. There are 5 characters in the game just like in the original tale. They are Mowgli, Baloo, Sheer Khan, Kaa and Bagheera. Each one of the characters can appear as a host on the left side of the reels or as a guest on the right side of the reels. Each one also has 2 extra features and if both a host and a guest are present on the reels there will be 3 extra features active on every spin.

If Bagheera is a host the Wild Fruit feature is active where the highest paying symbol in the game acts as an extra wild. The second feature is a random win multiplier from x2, x3 or x5 applied to every win. Sheer Khan as a host will award 1 Sticky Re-spin on a winning spin and Stacked Wilds can land on the highest reels in the game. Mowgli will sync matching reels of the same height with matching symbols. Also the Spreading Wild feature will be active awarding 1-2 extra wilds in any position. Kaa will trigger the Both Ways Win feature and all wins with a wild symbol will be tripled in payouts. If Baloo is a host in the realm one random symbol will be stacked in every spin. At the same time Honeycomb symbols can fall on the reels and each one can award coin prizes. 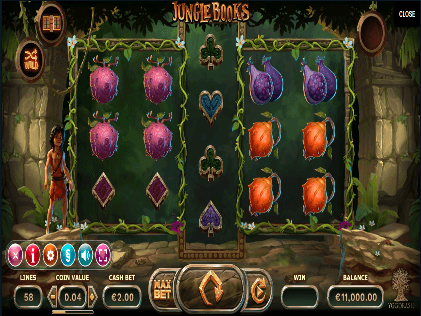 Yggdrasil Gaming once again managed to create a great video slot game. Like in all of their other video slots the animations are on a top level making the slot attractive to the eye. They always manage to surprise us with their choice of bonus features and Jungle Books is no exception. The designers came up with an original bonus which starts from the first spin in the game and makes the game play interesting. You never know which character will come as a host or a guest so you can always expect to get good winning combinations. Thanks to the extra bonus features all you need is one great spin in order to walk away with a big win on the reels of Jungle Books.