Experience the thrill of extreme sports by spinning the reels of this online slot machine by Yggdrasil!

Yggdrasil gaming has brought the thrill of extreme sports in Nitro Circus for all the slot lovers with this latest online slot by them. This 5 reel – 4 row slot with 25 paylines has the privilege of being the first branded slot game by them and guarantees unparalleled fun for the players. It also has high definition graphics and includes symbols like helmets, nitro bombs, the daredevils stunts men and some amazing vehicles that you might get a chance to ride while spinning the reels of the game.

Get set to experience the rush as you witness astonishing stunts and bonus features like Free Spins, multipliers and the exclusive Nitro jump while you enjoy this online slot. Nitro Circus consists of some unique feature confined only to this game. So, if you want to try them out for free before playing online for free, try the fun mode given below -

This slot game by Yggdrasil comes with action-packed gameplay, just like the Nitro Circus, on which the game is based and promises an adventurous gaming experience to the players. Symbols used in the game include helmets, the stuntmen, Wild symbol, alphabets constituting the word 'NITRO' and Nitro bombs (the scatter symbols). Reels of the game are transparent with glimpses of the Nitro Circus set in the background. Time and again, a stuntman can also be seen riding between the two ramps and gives the gameplay a real appeal. The music used consists of heavy rock soundtrack and roaring crowd in the background which go with the theme of the game really well.

High Paying Symbols – High symbols used in the game are the daredevil stuntmen who are a part of the Nitro Circus and perform the terrific stunts. They are Todd, Kurtis and Ryan. Among them, the racer with the red cap; Travis who is also the head of the group gives the largest payout.

Once you collect any of the 5 same vehicles, which includes rocking horse, reclining sofa chair, mini car and bathtub; one jump on the Nitro jump course is awarded. The players can also land 3 or more Nitro bombs or spin the reels of the game to get letters “NITRO” on the reels to trigger this feature.

At the start of this round, the players can choose from the following vehicles; FMX, Scooter, and BMX. After this, there will be 3 warm-up jumps which will be followed by 1 final boost jump. Players can collect coin rewards, speed boost, multipliers during these warm up before the actual jump.

Players need to collect 5 same vehicles to start the Nitro Jump Bonus game. These vehicles can only be collected during the warm-up jumps or in the Nitro mini-games. All the vehicles have a different value for tricks, Size, and boost that can affect the payouts and thus should be chosen wisely. Yggdrasil has come across as quite generous and one rocking horse is awarded for Free to all the players who play this games.

While collecting the vehicles look out for their stats which are displayed as: Tricks; the number of coins rewards it can bring, boost the chances of getting higher multipliers in the jump with that vehicle and size which determines the chance of getting more items.

During the Nitro jump, players can also use the Speed Boost which helps to increase the speed of the vehicle and is added to overall boosts. It can be activated by clicking on the red blast button. The higher boost you choose, the higher multipliers you get.

If you get 2 or more Nitro bombs, it will trigger the Nitro blast mini-game. You may win Free Spins (10- 30), Wilds which will replace 3 to 9 slot positions that are within the blast radius once you return to the base game or Vehicles and multipliers in this bonus round.

Nitro Circus has been developed by Yggdrasil and is the first branded online slot developed by them. Comparatively new to the gaming world, this software brand was founded in 2003 and has miraculously expanded its customer base in less than two decades of stepping in the online gambling world. Driven by the passion to produce best game, it has many auspicious awards to its credit.

Nitro Circus is a 5 reel – 4 row video by them aimed at bringing the thrill of extreme sports to the online slot players along with some generous chances to win. It is yet another testimony to the magic that can create when it comes to online slots. 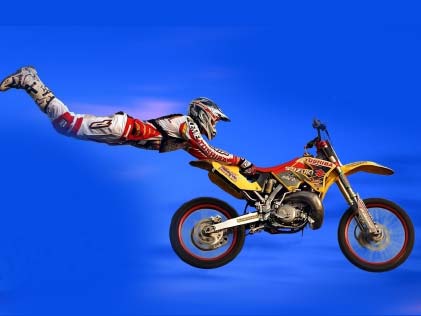 This 3 reel 4- row online slot game by Yggdrasil with 25 paylines unfolds the thrill of extreme sports to the online casino players. The reels of this slot game are set on the stage of the Nitro Circus with the glimpses of stunts men performing stunts and heavy metal music in the background. The symbols used are completely in sync with the game play and consist of helmets and stuntmen. Along with it, the game is also loaded with some terrific and unique bonus features like Nitro Free Spins and Nitro jump. These features make sure the players get a fair chance to win as they bring along generous Free Spins and multipliers. Thus making it a right choice for players who are seeking fun and are on the look out for some great chances to win!