Overview of The Walking Dead Slot

Aristocrat Slots Online manufactured this entertaining new theme with Wilds, Free Spins, Multipliers, scatters, Michonne Attack, Reel Growth, Wild Attack, and a cool bonus round that Walking Dead fans are going to love. All this is set over a massive 100 pay-lines with a potential £500,000 pay-out.

100 pay-lines so the reels need to fit in this large number of potential cash cows by adding an extra slot to each reel making this sort of a 6x6 slot. However, the reels on the left right (reel 1 and reel 6) are just 4 symbols deep. That is to say, there are 6 reels, and the 2 outer reels have 4 spots for the symbols to land and the 4 inner reels have 6 spots for symbols – something very different!

Features of The Walking Dead Slot

This is so much better than first version of the slot. The reels have animations popping out at you all the time, and as the reels spins, characters and zombies drip down the reels. As far as slot designs go, the animation on this slot is amazing – just very impressive!

Rick Grimes, Lori grimes, Glenn Rhee, Shane, Daryl Dixon, and Andrea are the star symbols on the slot giving Walking Dead fans the opportunity to land cash wins from their favourite characters in the series.

With the theme coming from the famous AMC, the deal between Aristocrat Slots and AMC would have been one that makes sure the slot stays in tune with the theme of the film. Of course, for AMC, this is a great mutual agreement to give the hit series more prestige and popularity.

Therefore, the game play is very smooth, the graphics are spot on, and the sounds have been taken straight from the voices of the characters in the film, so you Walking Dead fans out there are going to feel right at him playing this slot.

To get free spins you will need to get to the bonus round where there is a Disease Control Centre which has the bonus wheel that you spin. If the wheel lands on free spins, then the reels will spin for given number of spins and all winning are totalled up displayed at the end of the round.

The Walking Dead Wild symbol is a substitute symbol. It can land within any combination in the game and you will be paid as the wild will act as if it is one of those symbols.

Randomly you will get a Wild Attack on this game where the zombies come walking out of the reels and eventually the symbols will appear, and several wilds will stick to the screen – any combinations that link with wilds will pay out according to the pay-table!

To get to the bonus round where you spin the wheel you will need to land the scatter symbols anywhere in view on the reels. Any multipliers can be won when you spin the Disease Control Centre wheel to see which prize you can land.

Basically, the scatter is quite obvious to see. It is the ‘Wheel Bonus’ symbol and spreads across all the reels.

This is where all the action happens on The Walking Dead Slot. Get the ‘Wheel Bonus’ and you will be launched into a bonus round where you will be spinning the wheel attempting to the inner circles where the big prizes lay in waiting.

Free spins, bonus multipliers, and of course the chance to land a huge £500,000.

The jackpot for the game is within the bonus round where you can win £500,000. If you strike it lucky.

As this was released quite some time ago, it was not designed for mobile play. However, some casinos that use instant play HTML5 have the option to play The Walking Dead, but you need a large screen as there are so many reels!

There is a 96% expected return to player, with so many pay-lines and reels this not surprising!

Why Play The Walking Dead Slot? 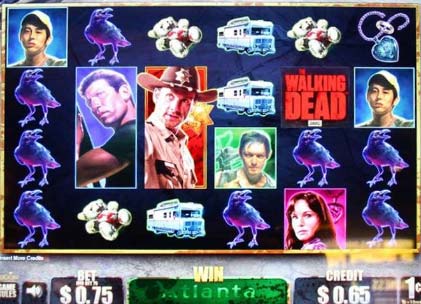 For fans of the TV show itself, well there is no need to answer this question. However, even if you are not a fan of The Walking Dead, but you do appreciate animations and the efforts put into a movie like slot, then you should try the Walking Dead Slot.

Zombies literally walk across the reels in mid game, the features pop out with movie quality scenes that play out in front of you. Literally, there has been so much effort into the animation side of this slot. If you want to be amazed, then check it out.

Of course, another great reason to play is because for just $3.00 a spin and an RTP of 96%, you have the chance to hit a massive £500,000 jackpot! Few slots out there offer this kind of opportunity at such a low cost per spin.