If you’ve ever been privy to listening to or reading fairytales before, you’ll know all about the trolls that hide under bridges. Whole families of them. Of course, whenever a favourite meal of the trolls would cross over the bridge, they’d open up a trap door in the middle and capture it. Rabbits, goats, sheep – you name it, the trolls like it for their dinner. This Leander Games slot offering is able to bring that fairytale to life, with some of the best graphics and imagery around today. You’ll get to be introduced to a few new characters in the game while playing too. A lot of work has gone into the design and gameplay of this Leander slot, so you can guarantee a visual treat as well as exciting rounds of spinning the reels. In addition, you’ll get to listen to some very nice soundtrack music as you play.

Should you choose to play this Leander Games slot, you’ll get to see a five reel, three row layout on offer. This exists as a very standard design, so it should all look familiar to you if you’re a regular gamer. Alongside this setup, you’ll also be able to place bets on a total of 25 different pay lines. These lines are not something that you have the ability to adjust. However, you can still form wins from both left to right and right to left. Turning our attention towards the visual appeal of the game, you’ll certainly get to see some of the developer’s best graphics work. The bridge in question can be seen in the background of the reels.

A part of this slot game that you can customise is the value of the wager that you bring into play per spin. This is done by using the arrow buttons on either side of the ‘Bet Per Line’ section. With these, you can select between bets of $0.25 per spin and £250 per spin. Alongside this, there’s the inclusion of an autoplay button. This allows you to set the reels off spinning several consecutive times at the same wager level, making for a handy addition.

Speaking of the reels and game play, you’ll find various different symbols in the slot.

Like we spoke of earlier, this game comes from the minds of the Leander Games provider. It’s a company that has been around since the year of 2008. Almost all of the slots that come from this developer feature bonus rounds and intriguing inbuilt features for players to enjoy.

In order to assist the goats with getting from the grass on one side of the bridge to the other, you’ll need to employ some handy tricks. Fortunately, the Leander Games team has made sure to add some special perks to Trip Trap Troll to assist with this. 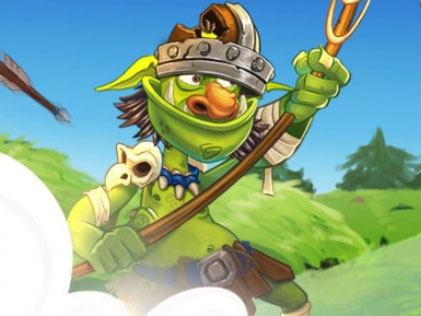 We have to say that we very much enjoy this online slot game from Leander. It contains some very impressive graphics and the theme behind it is well-known. Additionally, when you incorporate the slot’s special features into this, you’ll find that you’re playing a truly enticing game. On the whole, it will appeal to all players.